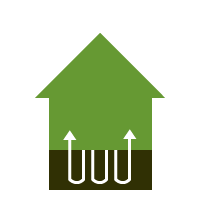 What is geothermal energy?

Is geothermal really good for the enviroment?

What are the major benefits to the homeowner?

Can you be more specific about the environmental advantages?

How much will a geothermal system cost me?

How long does the geothermal heating & cooling system last

What is geothermal energy?

The earth absorbs approximately 47% of transmitted solar energy and stores this free thermal energy beneath our feet. So even though the air temperature is hot in the summer and cold in the winter, the ground temperature just a few feet below the surface is relatively constant year round.

Geothermal systems take advantage of this by transferring the warmer energy into our homes in the winter. In the summer, the process is reversed. So the earth is like a large solar collector and storage battery, with more than enough thermal energy for everyone.

Is geothermal really good for the enviroment?

Absolutely! The EPA has called geothermal systems “the most environmentally-friendly way to condition our homes.” A ground source heat pump does not have an exhaust and emits zero carbon dioxide. Removing the combustion process from heating reduces our dependence on foreign oil and eliminates the potential for carbon monoxide poisoning.

It is not. The basic technology has been around for more than 50 years, and many homeowners and businesses have been enjoying the benefits of geothermal for over 20 years.

In recent years many improvements have been made in the materials used, the installation methods, and the efficiencies of the compressors, pumps and other equipment.

What are the major benefits to the homeowner?

Homeowners enjoy lower utility bills (40% to 80% lower than with conventional systems), lower maintenance, and higher levels of comfort, year-round. Even more than that, though, they have the peace of mind of knowing they're being environmentally responsible.

Since a geothermal system burns no fossil fuel to produce heat, it generates far fewer greenhouse gas emissions than a conventional furnace, and completely eliminates a potential source of poisonous carbon monoxide within the home. Even factoring in its share of the emissions from the power plant that produces electricity to operate the geothermal system, total emissions are far lower than for conventional systems.

Can you be more specific about the environmental advantages?

According to data supplied by the U.S. Department of Energy and USEPA, a typical 3-ton residential geothermal system produces an average of about one pound less CO2 per hour of use than a conventional system. To put that in perspective, if just 100,000 homes were converted to geothermal, the country could reduce its CO2 emissions by 880,000,000 lb.

That would be the equivalent of converting about 58,700 cars to zero-emission vehicles, or planting more than 120,000 acres of trees.
And the waste heat removed from the home's interior during the cooling season can be used to provide virtually free hot water-resulting in a total savings in hot water costs of about 30% to 50% annually, and lowering emissions even further.

Not really. While many homes have been fitted with geothermal systems, commercial enterprises, including factories, retail stores, office building and schools also use geothermal to save energy and protect the environment. In fact, there are more than half a million installations in the United States today.

According to the U.S. EPA, schools are a particularly attractive place for the use of this technology. Across the country, schools using geothermal right now are saving an estimated $25,000,000 in energy costs-which can be used instead for better educational equipment and more teachers. These schools also save a half-billion pounds of CO2 emission per year.

Should all of the nation's schools convert to geothermal, the EPA has estimated that we could reduce oil imports by 61 million barrels annually, and provide the same environmental benefits of planting 8 million acres of trees or converting nearly 4 million cars to zero-emission vehicles.

If the same comparison were made across all commercial and residential segments, the potential for environmental benefit would be staggering.

How much will a geothermal system cost me?

GroundUp offers Geothermal Systems to qualified homeowners for only $24,000.

When you consider the operating costs of geothermal heating, cooling, and water heating, energy savings quickly offset the initial difference in purchase price. Only quality installation makes this technology work to its full potential!

The members of the Western New York Geothermal Alliance all commit to the best geothermal design, standard low cost prices, and highest quality of equipment.

The goal is to provide the best and most efficient heating, cooling and domestic hot water system to the people of Western New York.

How long does the geothermal heating & cooling system last

To get started with a Geothermal System Expert Contact Us now!

Find Geothermal Near You